Allow myself to introduce my...
ya you've already heard that one eh? 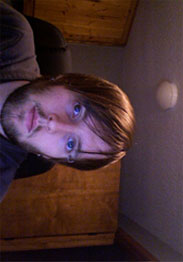 Where to start? I am 41 years old and currently living just outside of Kansas City, MO. I'm a father of 2 children (Nathaniel & Mia). I enjoy not writing bios, music, reading, design, development, following the latest Apple rumors, fishing, and spending every second I can with my family.

I've always had a love for computers, but wasn't really drawn into web design until the late 90s. I built my first website somewhere around 1998, and I've pretty much been doing it ever since.

My career officially started back in 2000 working with flash and e-commerce development at a small startup with 4 friends of mine. I held several positions as a web developer doing mainly CMS and E-Commerce programming. I did some front end development, and no design at the time. After stumbling across the CSS Zen Garden in 2005 I completely changed my focus, and began the journey towards building standards based websites using CSS/XHTML. I was impressed by what could be accomplished with CSS and the design put into the Zen Garden submissions inspired me to take a stab at it myself. I've been doing design / front end development ever since.

Music has been a major part of my life over the last 10 years. My first step into music was with the band Six Percent. I spent 6 years touring around the midwest with some of my favorite bands at the time. I've since then played in 4 other bands: The Tuesday Project, Indira, The Elizabeth Dane & my current band My Own Monroe.